Creating a task based internal system for a digital pharmacy to manage patients and orders.

Founded in 2015, Simple Online Pharmacy began life providing over the counter treatments to patients across the UK. This quickly expanded into private online GP clinics, and NHS prescriptions. Today, we are trusted by over 1000 patients daily to make sure they receive their medication conveniently, safely and on time.

In order to continue serving our patients with the best levels of care and to bring in new patients, our internal tools have to be able to handle these requirements.

Why create a new tool?

The goal of this project was to create a new internal tool that can be used by the pharmacy, clinical and support teams to manage patients and orders. The tool needed to be simple and easy to understand and onboard new staff but could also handle complex tasks as well as automating a lot of the manual tasks whenever possible.

This was needed because the existing tool couldn’t scale with the business, it wasn’t user friendly which made it hard to onboard new staff and it had loads of manual tasks that were either not needed or could be automated easily. It also caused a lot of human errors and as we were in charge of getting medication to people, even 1 error was too many.

We were in a very lucky position of having access to 100% of the users who will be using the product. Before starting to plan the project I wanted to see if I could map out the full business process of an order from start to finish so I spent a few days speaking with at least 2 people in each of the departments. 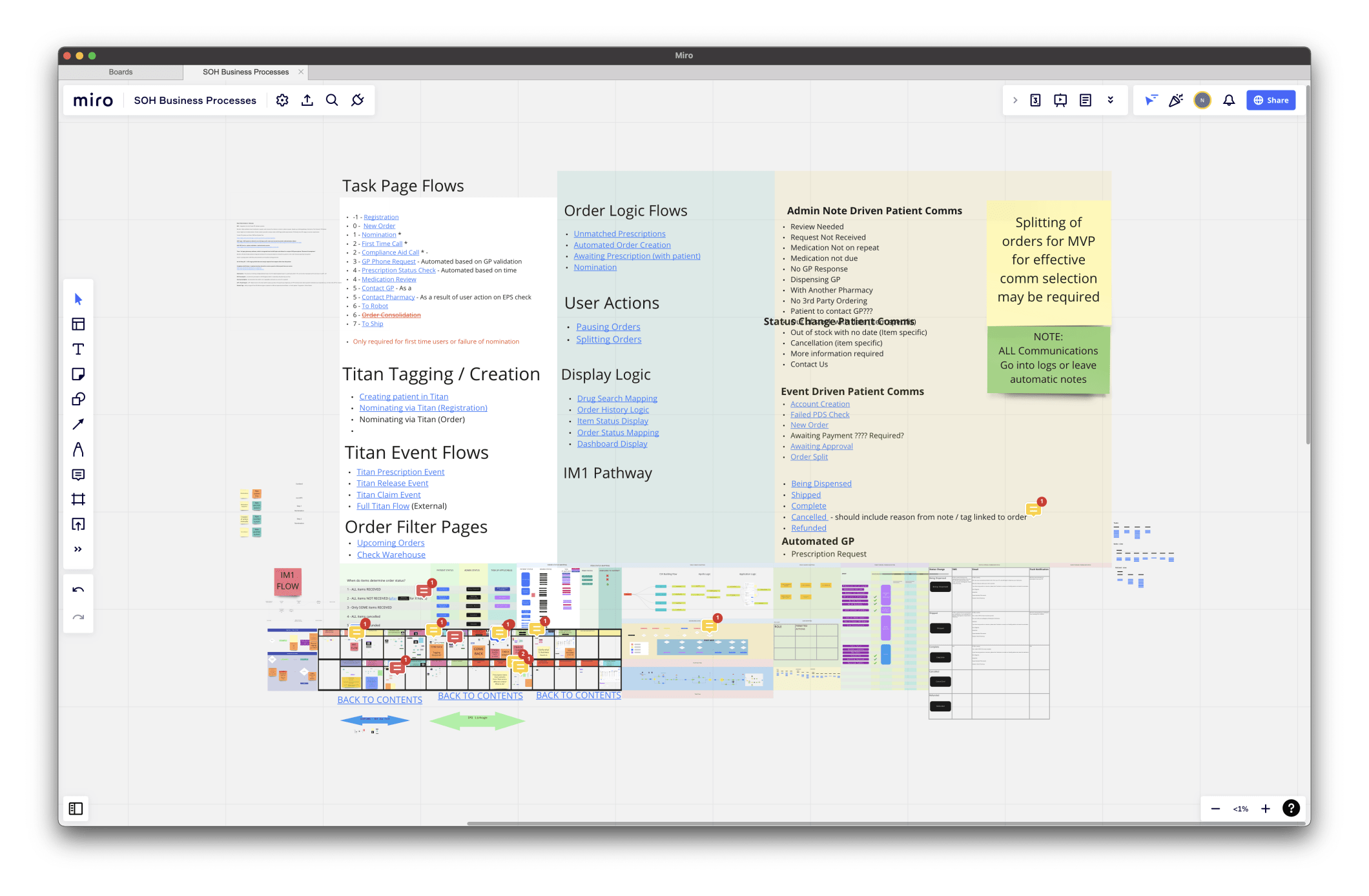 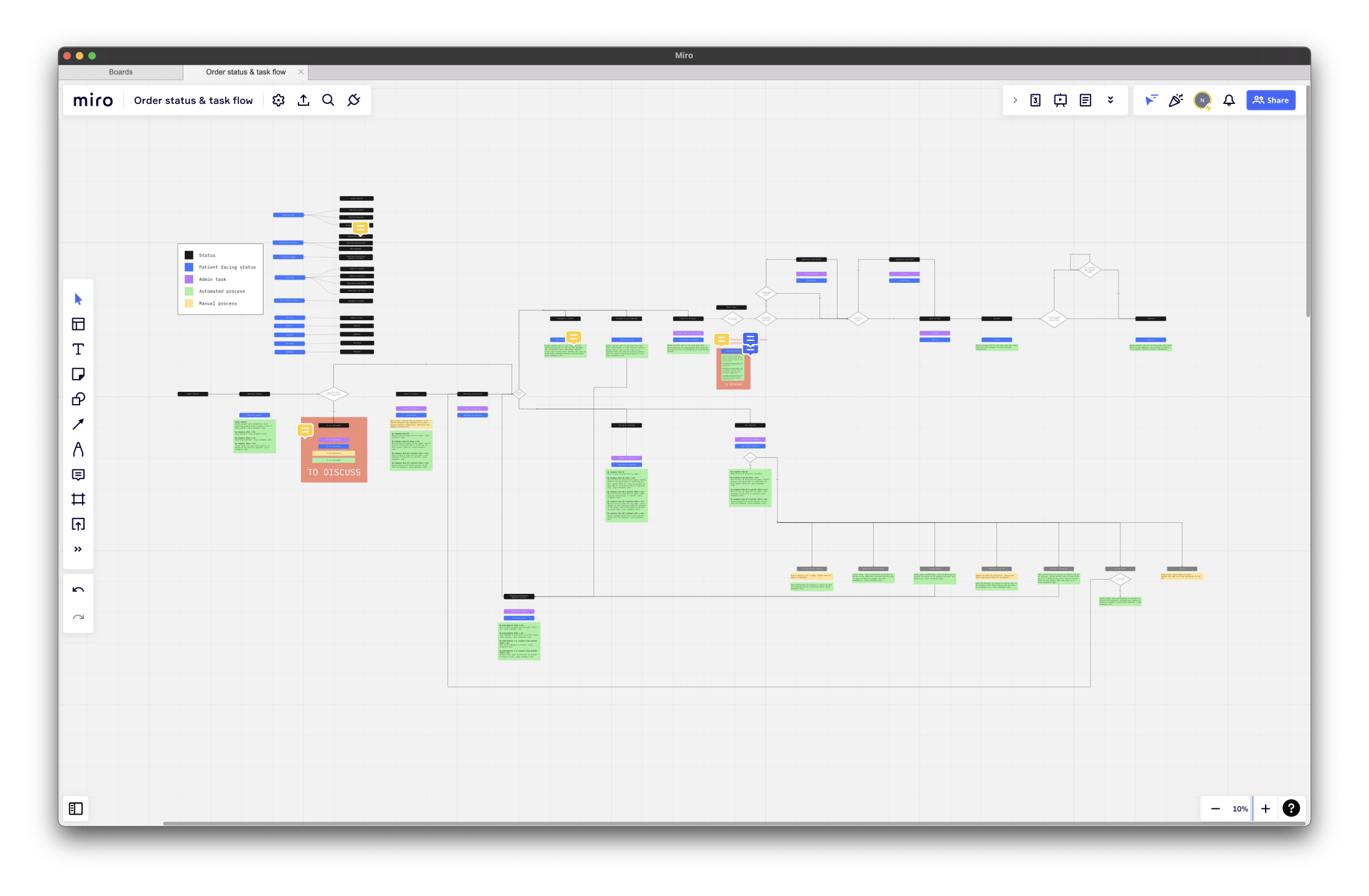 While this was happening I also created a short survey that I sent to all the team members who used the existing tool. 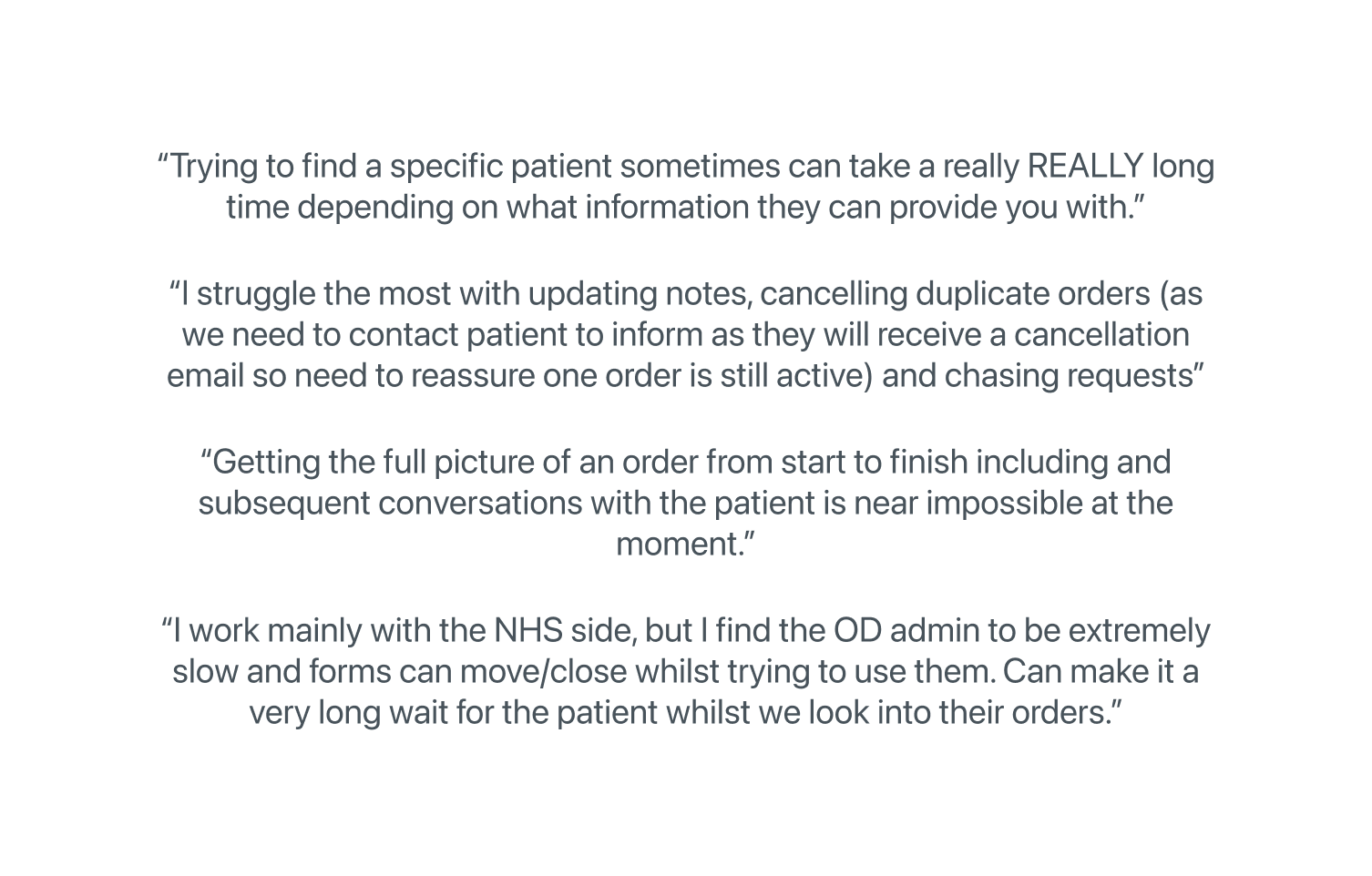 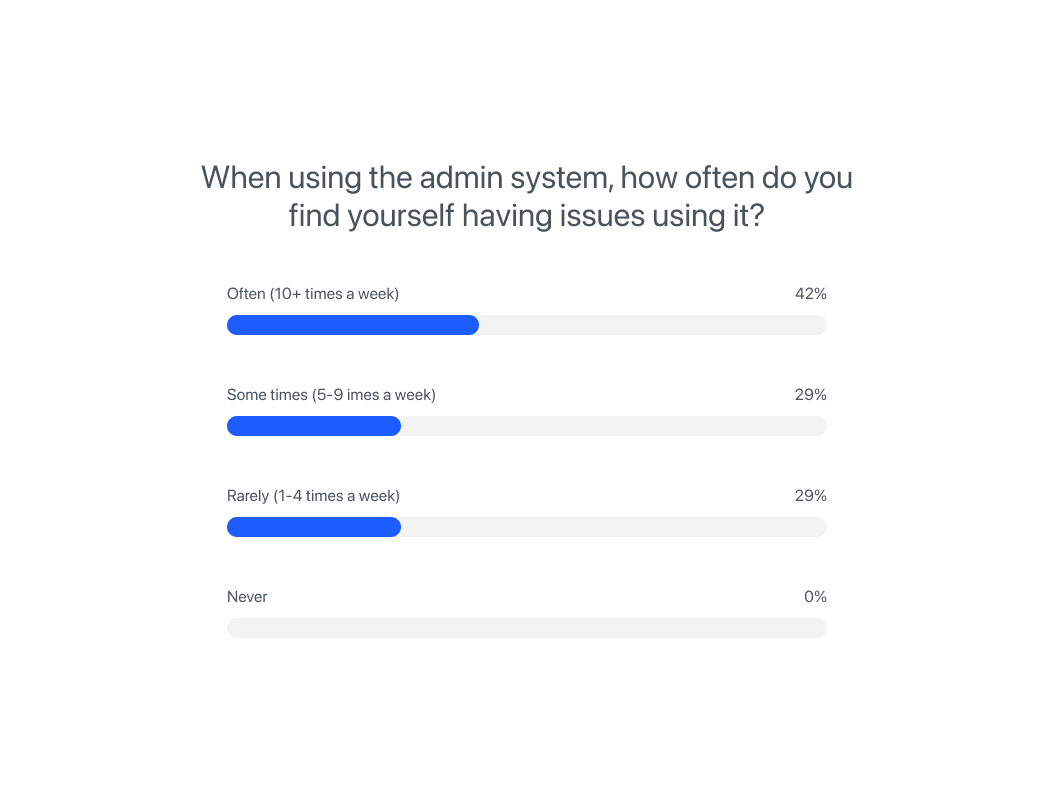 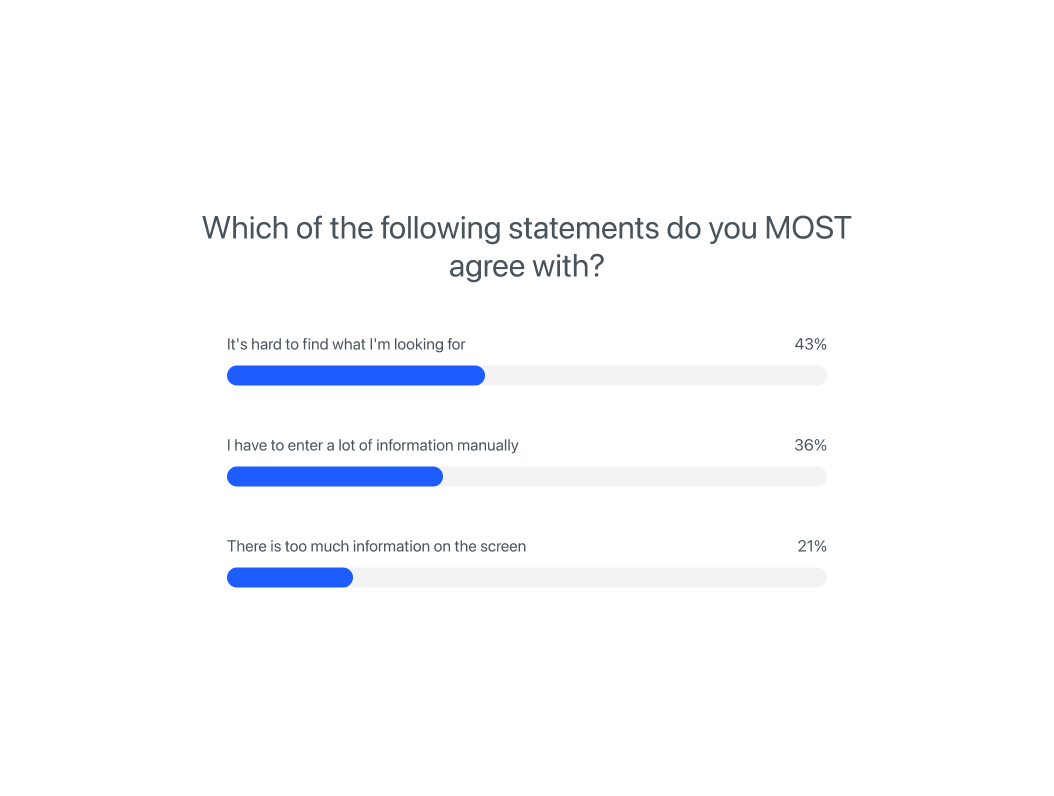 After this was done I decided to run a workshop with the co-founders and team leads in the operational teams (pharmacy, clinical, support, warehouse). The goal of this workshop was to define the MVP, the key problems and the metrics we would use to measure the success of our solutions.

Figuring it all out

Unlike a regular ecommerce order, a patient’s NHS order couldn’t just go from the warehouse to the back of a truck to be shipped and because we were dealing with medication and regulatory pharmacy requirements, we could never have a fully automated system. So the flow of an NHS order was used to map out the core tasks that were needed for the MVP as well as figuring out what could and couldn’t be automated. 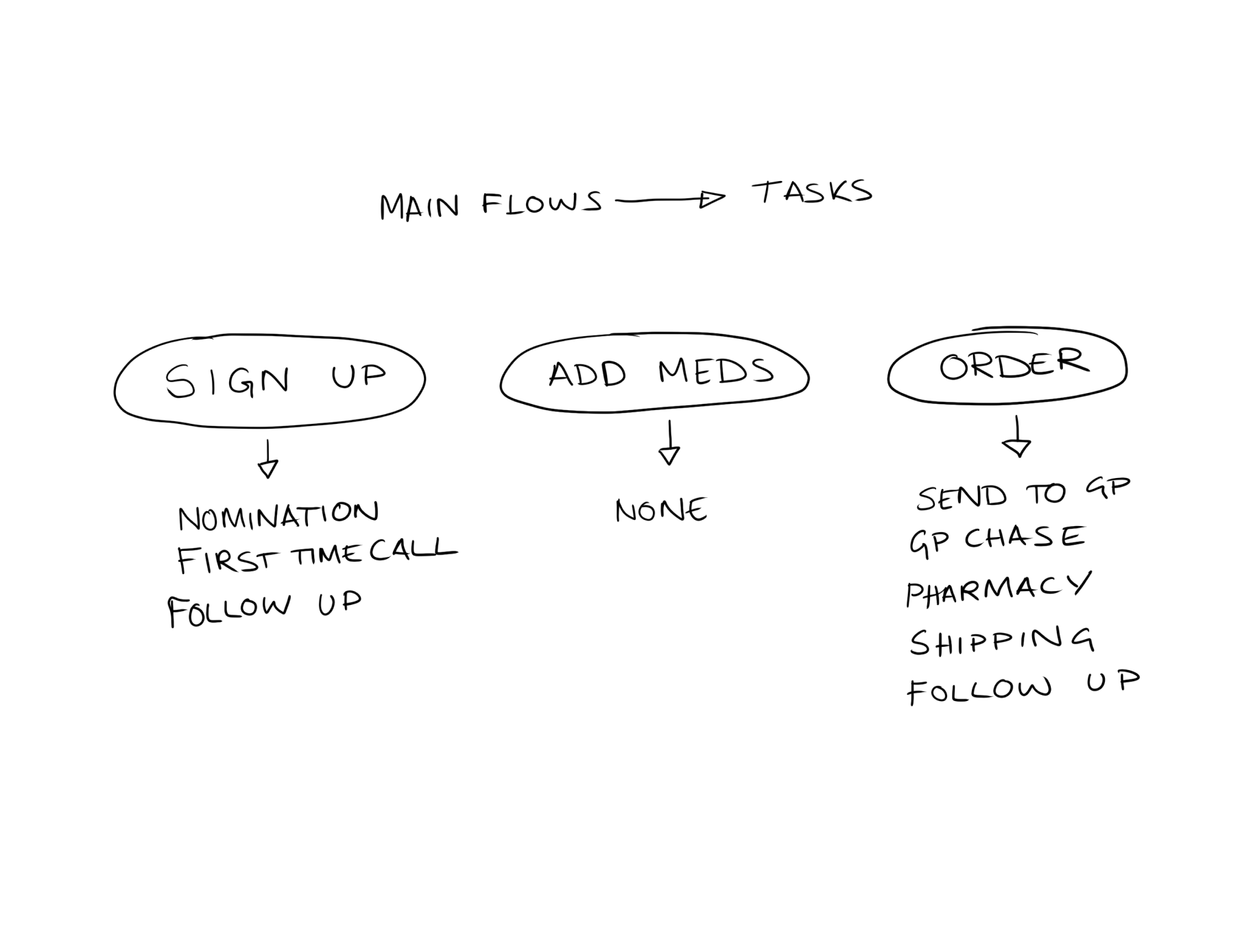 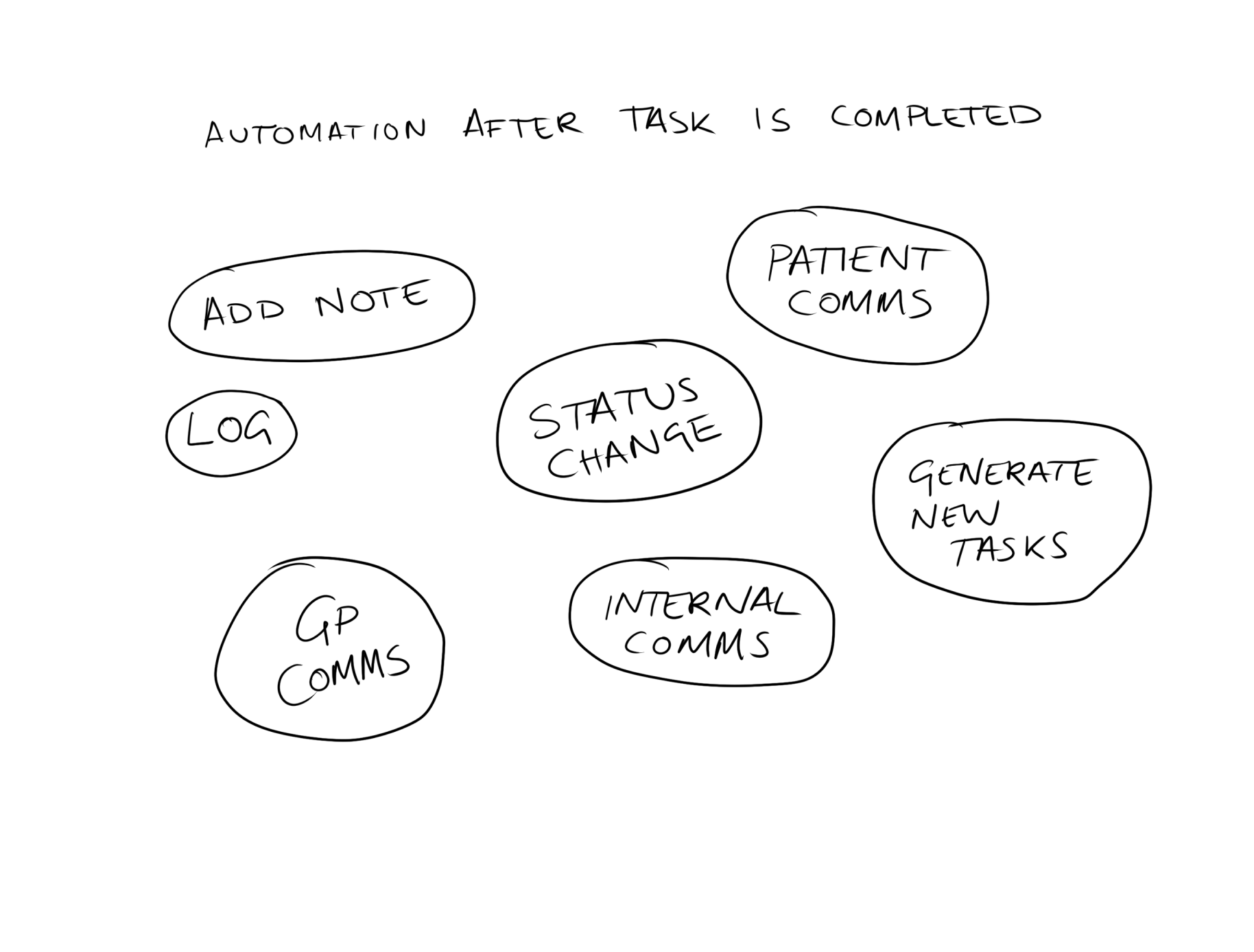 I started running multiple sessions with each one having different members from different internal teams. Before each session I sent rough wireframes and concepts for the teams to look through then during the sessions I guided them through the ideas and got them to give feedback. 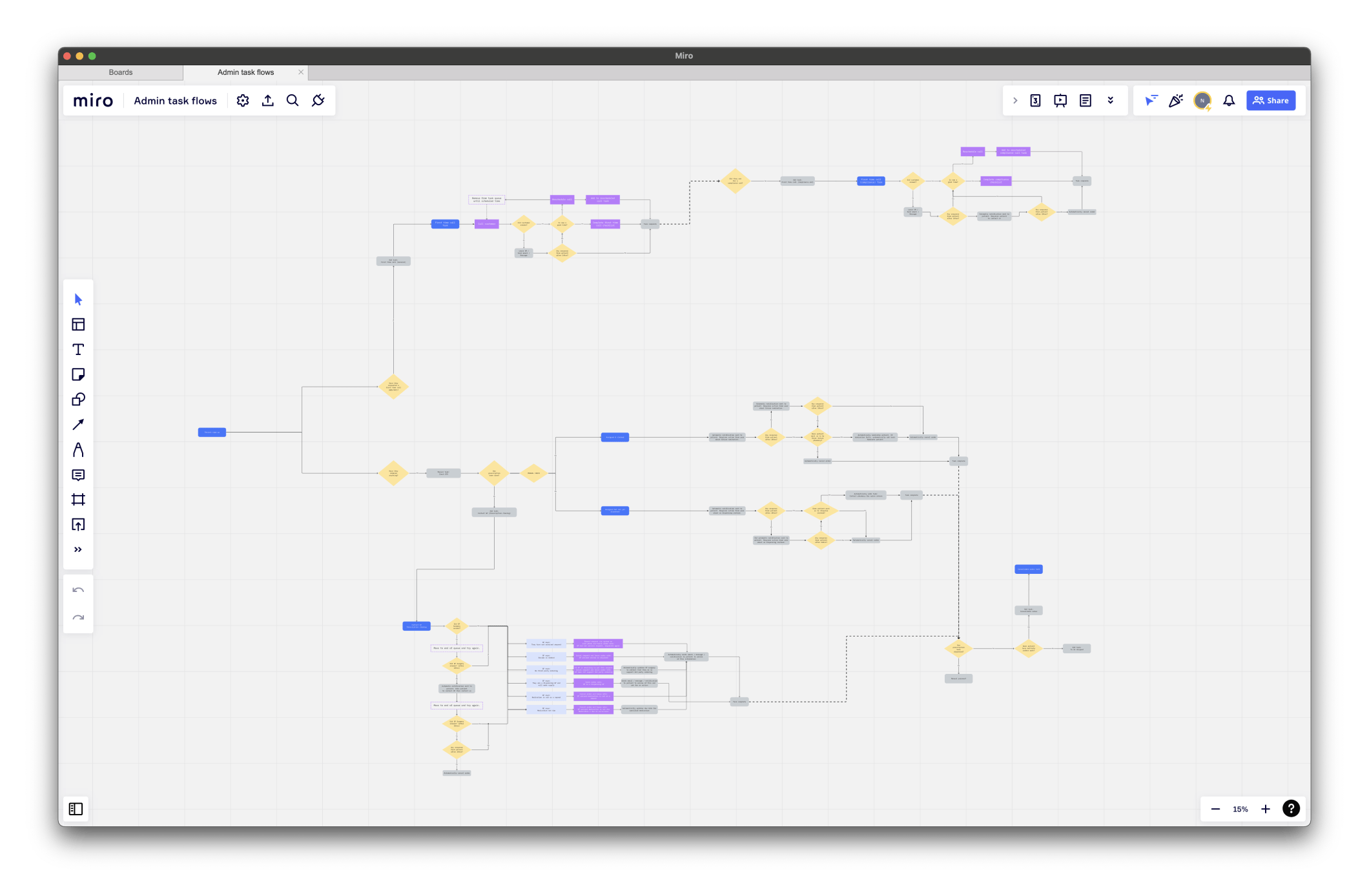 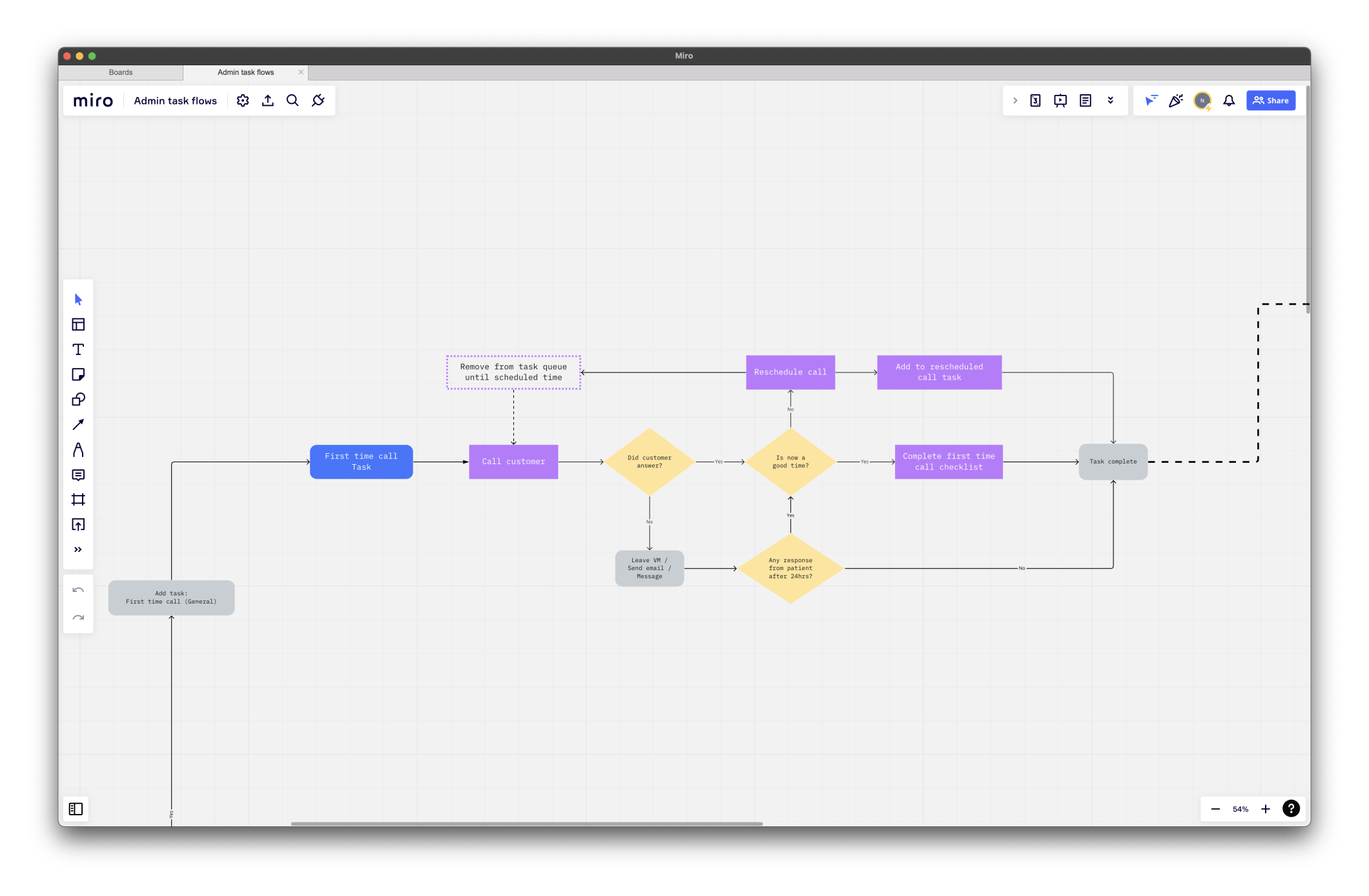 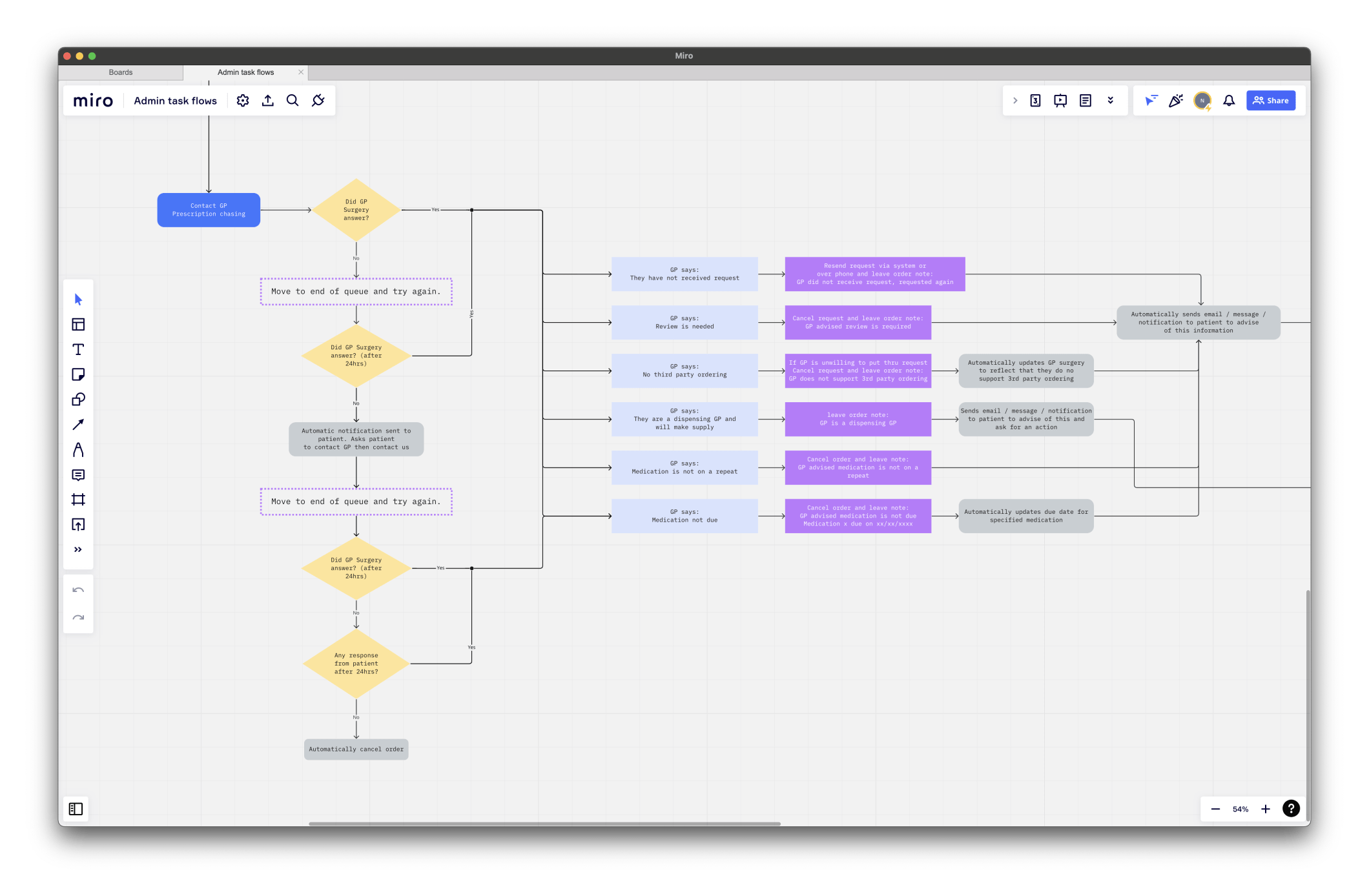 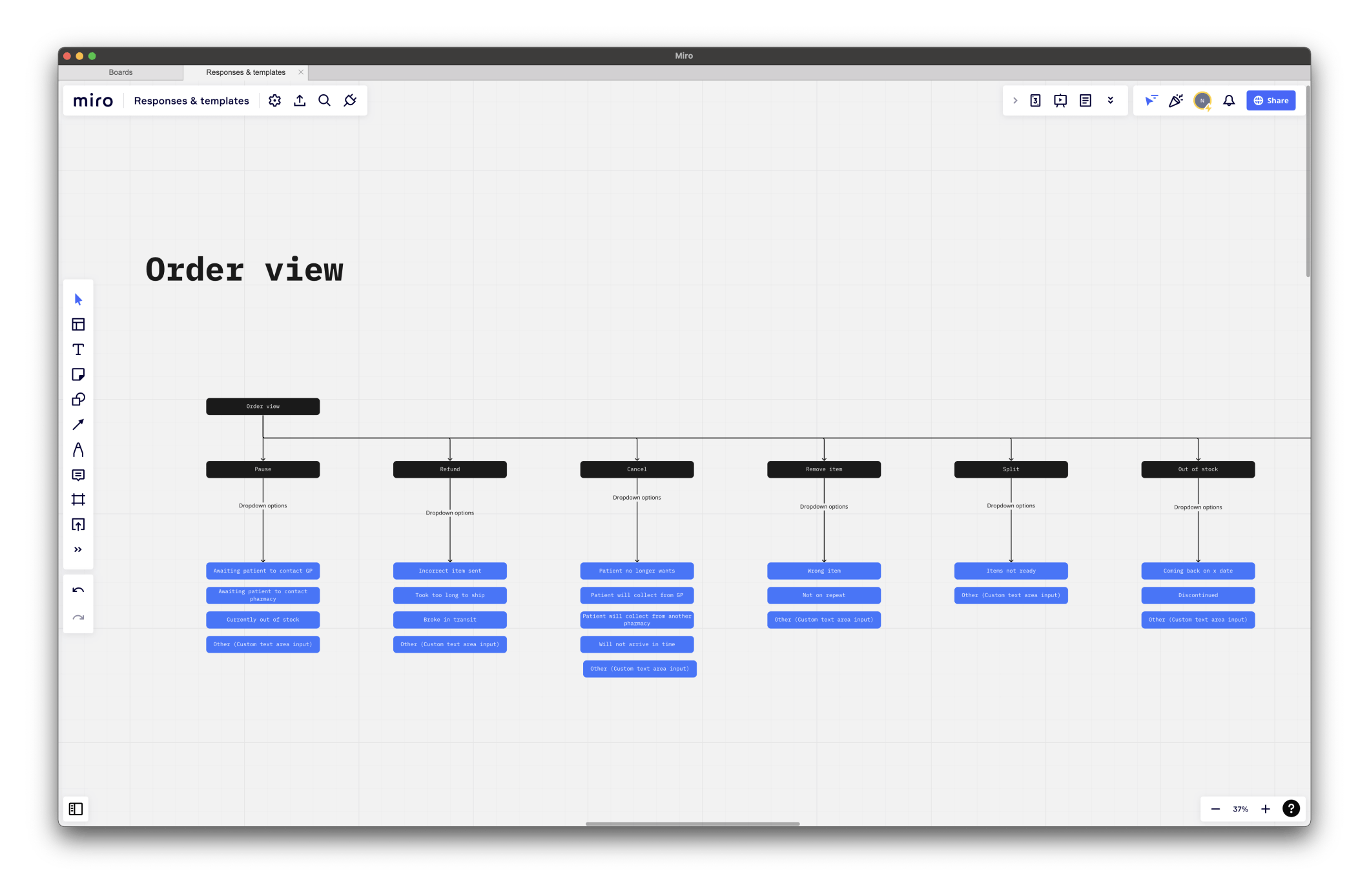 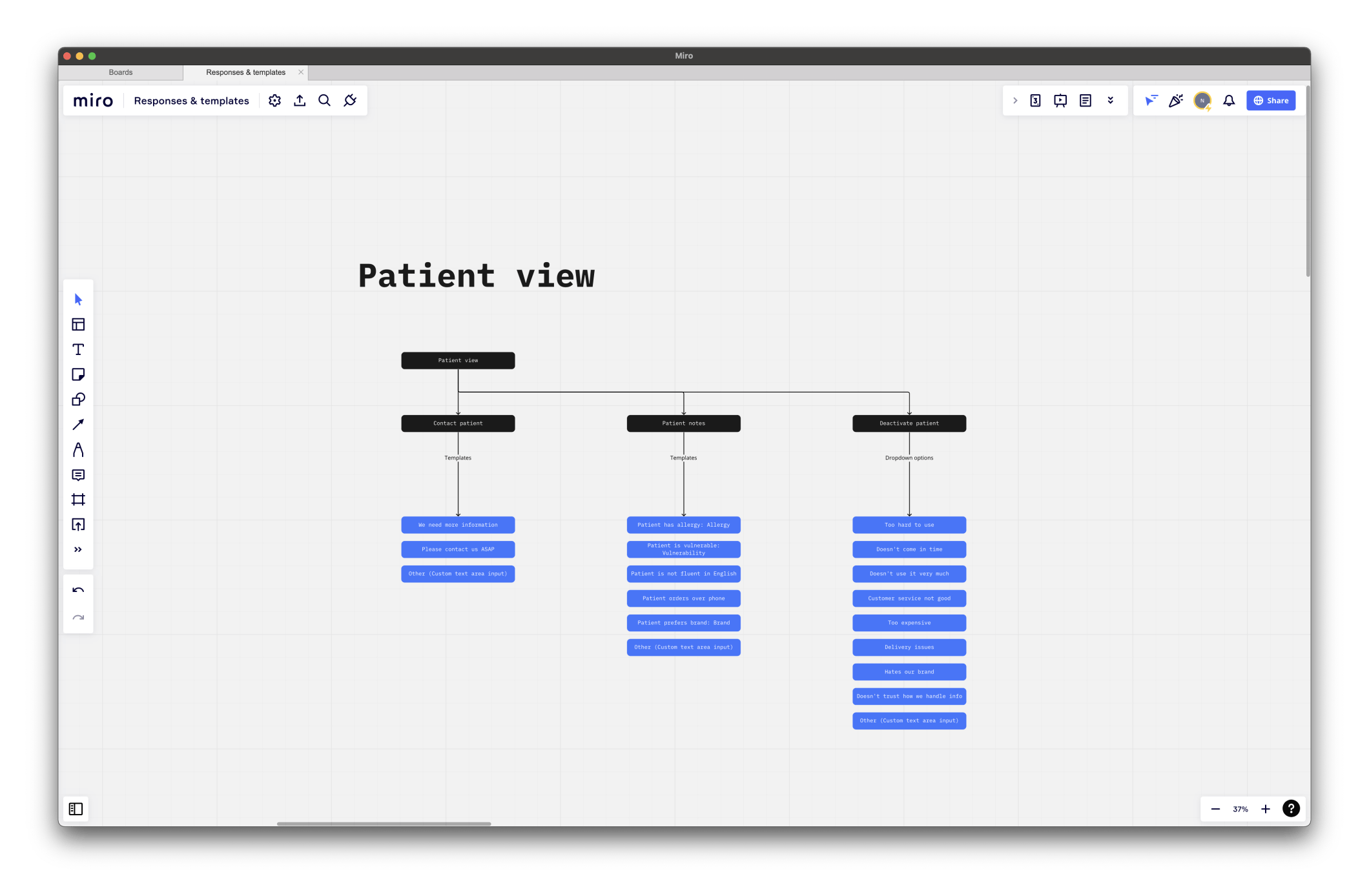 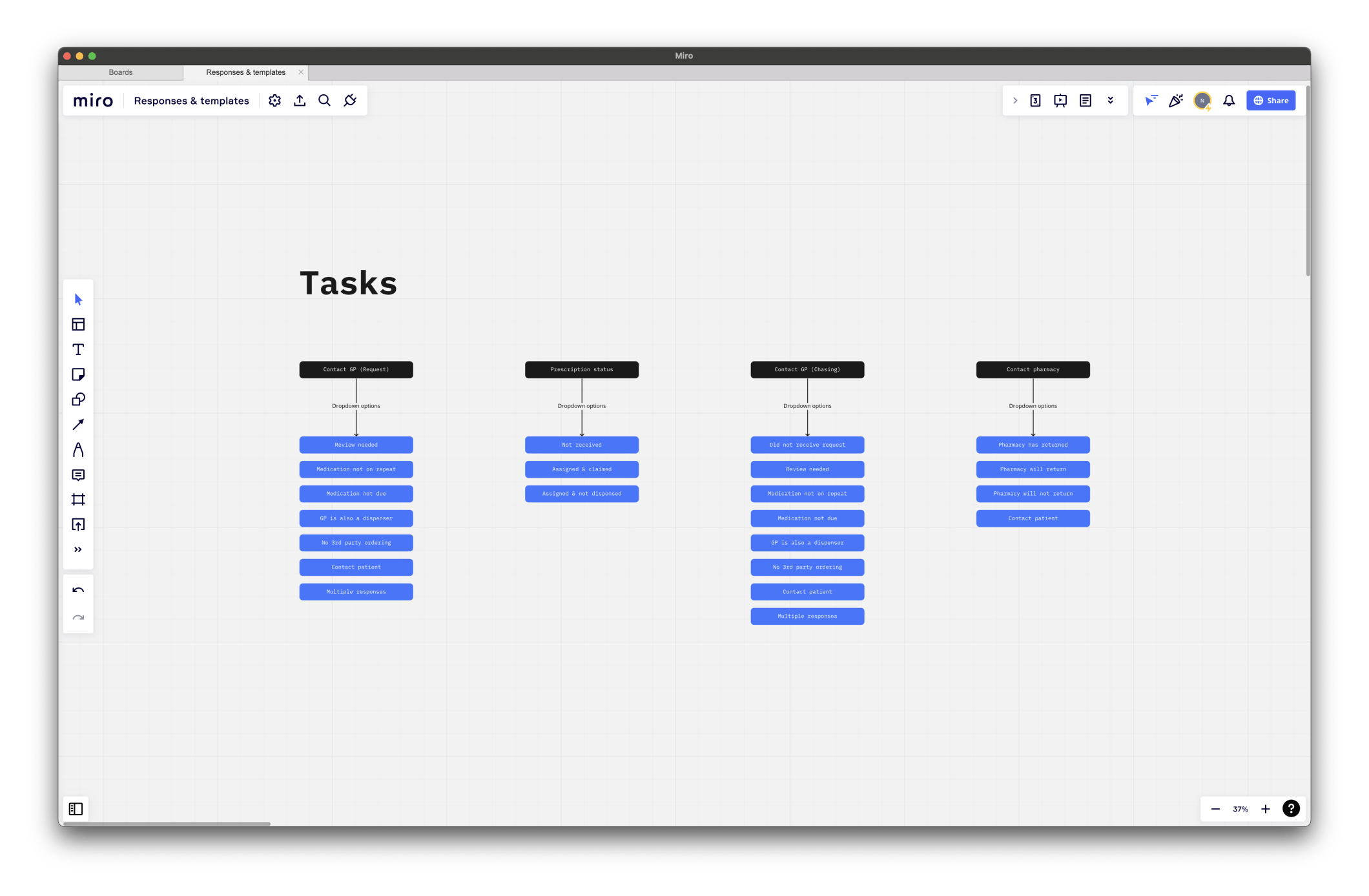 After these sessions, I was in a really good place to start designs. To ensure that the designs reflected the feedback from the sessions along with the goal of creating a better system than the existing one, we started a weekly feedback loop. 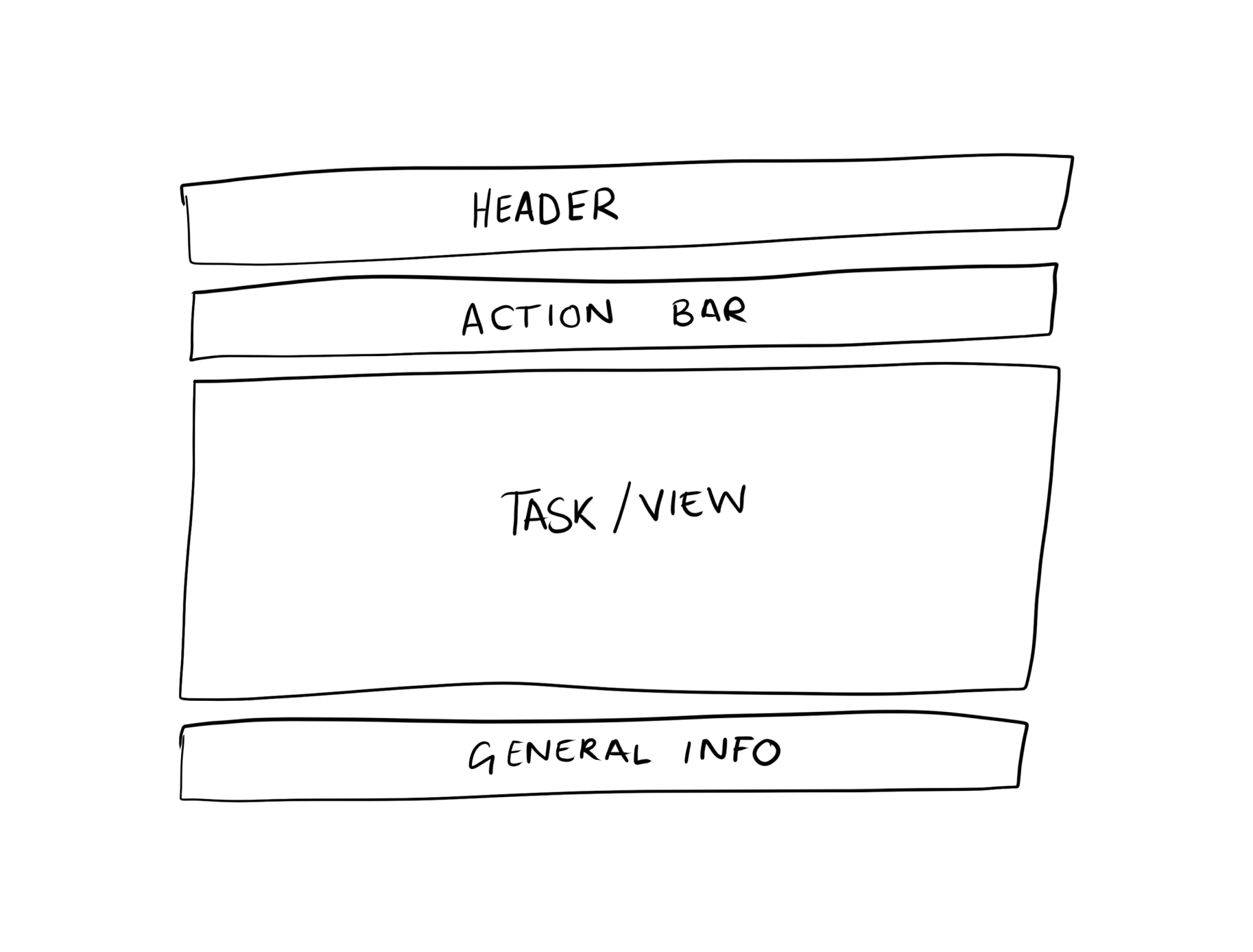 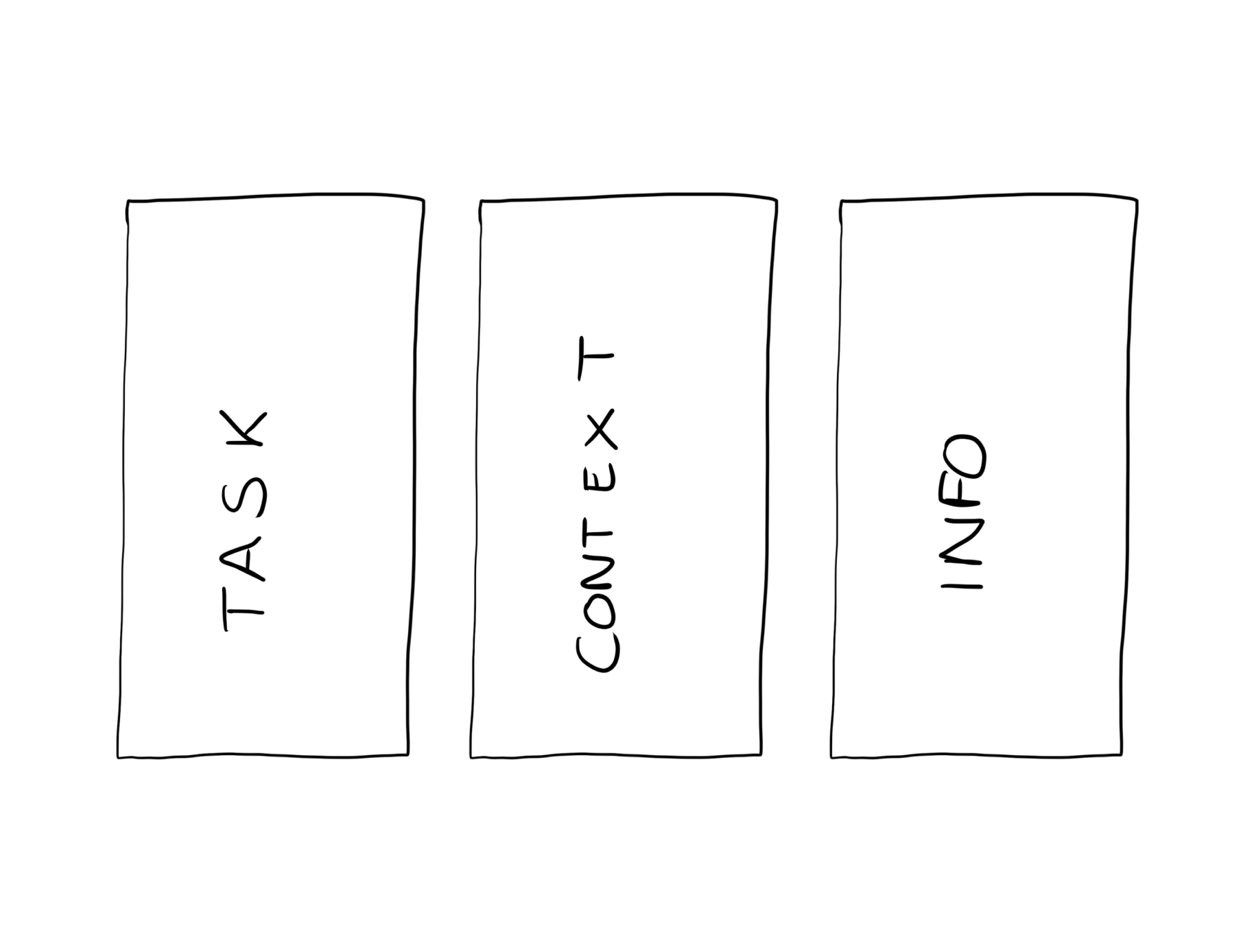 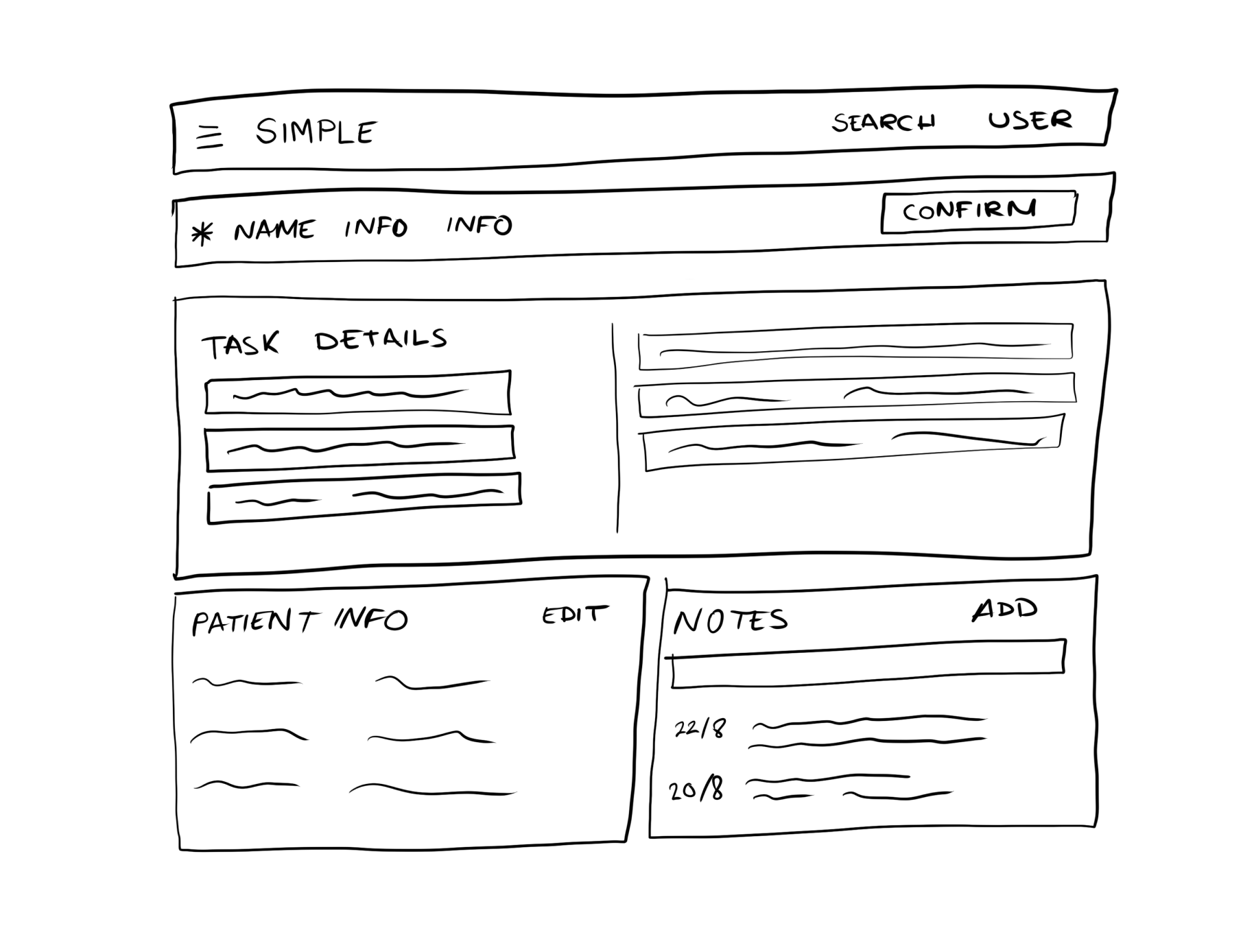 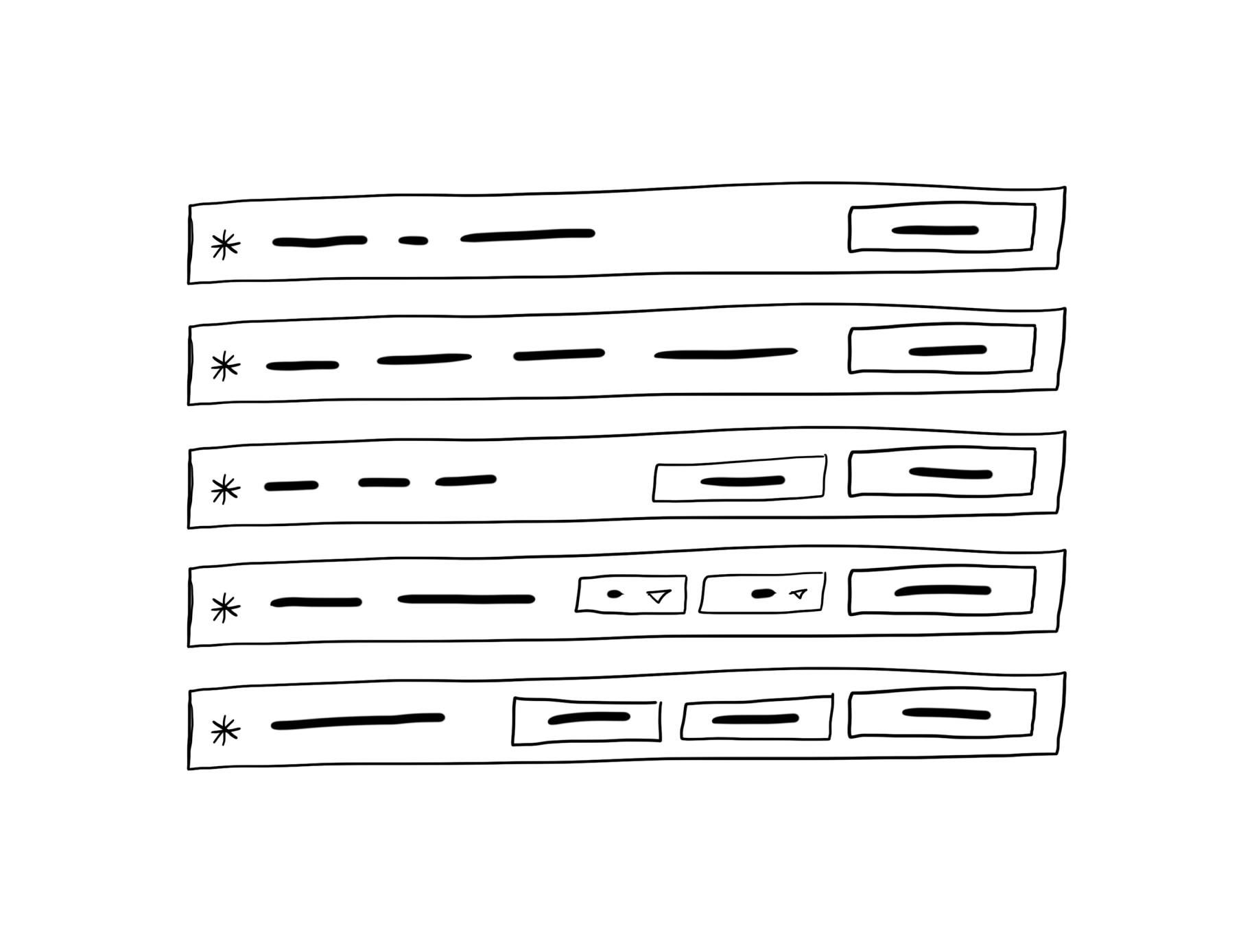 I’ve always known that when it came to putting the UI together, it was going to be really plain (in the best way possible). There was no need for anything flash and it didn’t need to reinvent the wheel.

The first major milestone of the project was reached, we finally had the designs for the MVP ready, we had a simple click through prototype that had been passed around for the last week and had been a big success in terms of understanding. 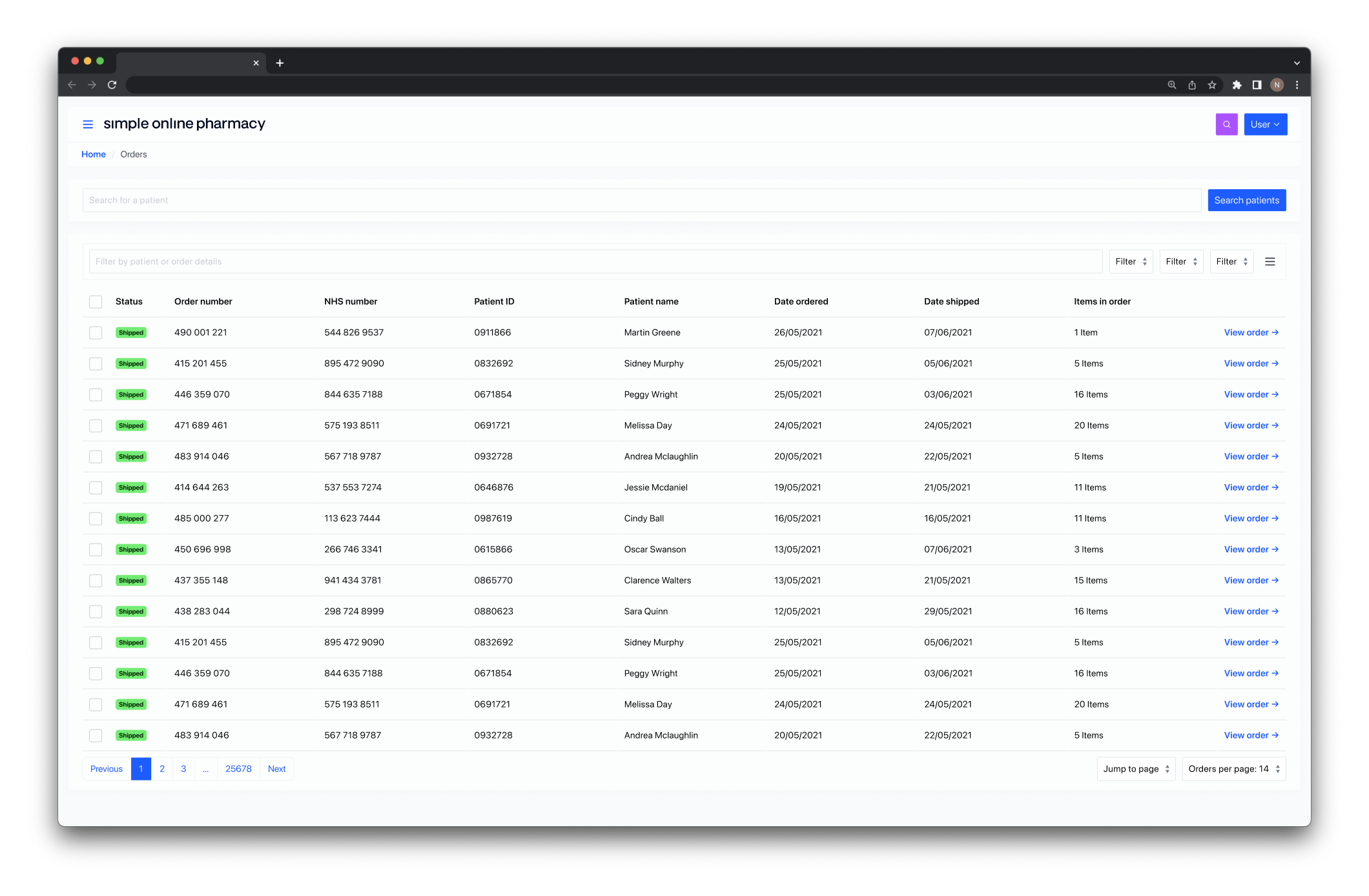 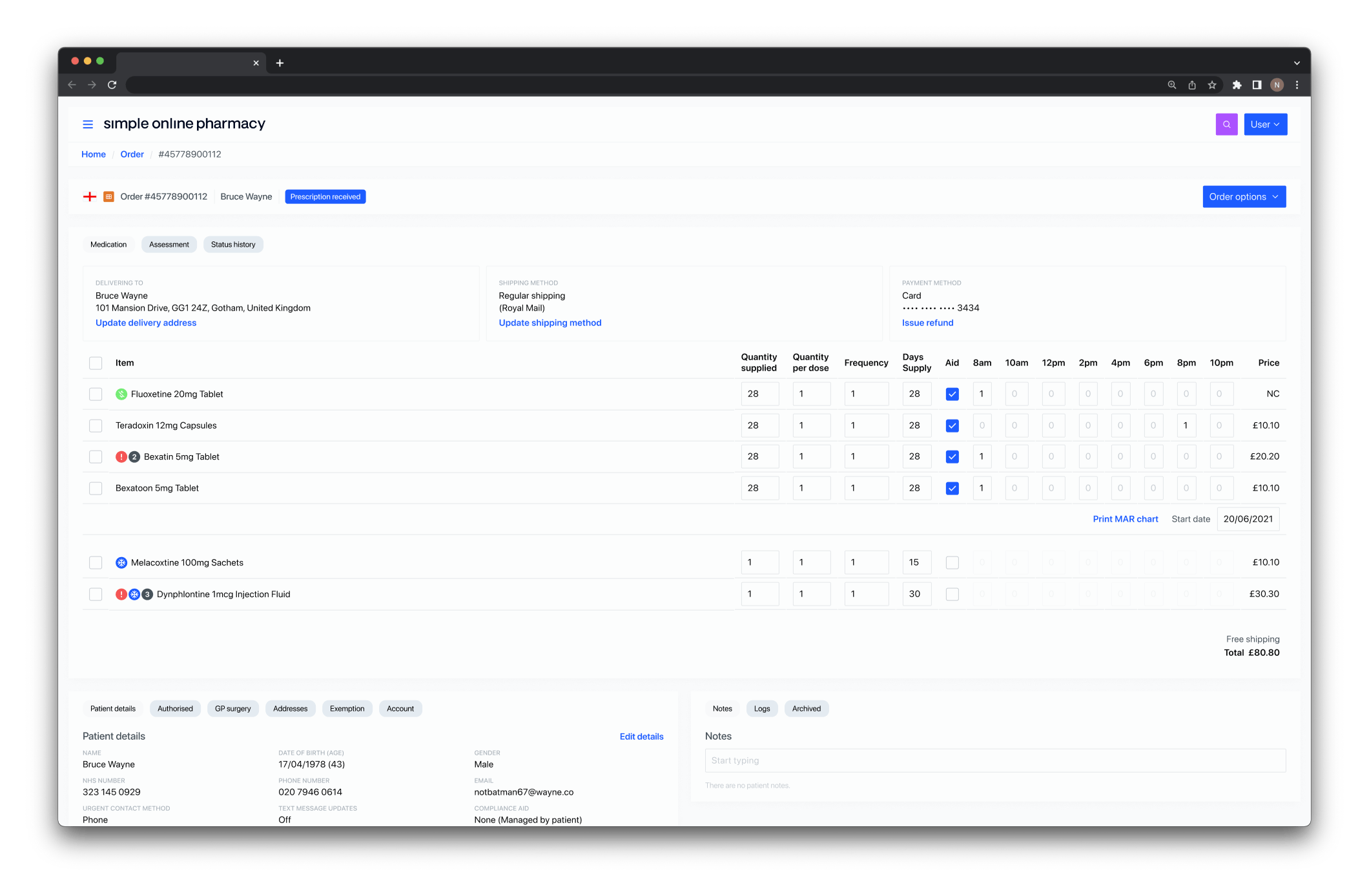 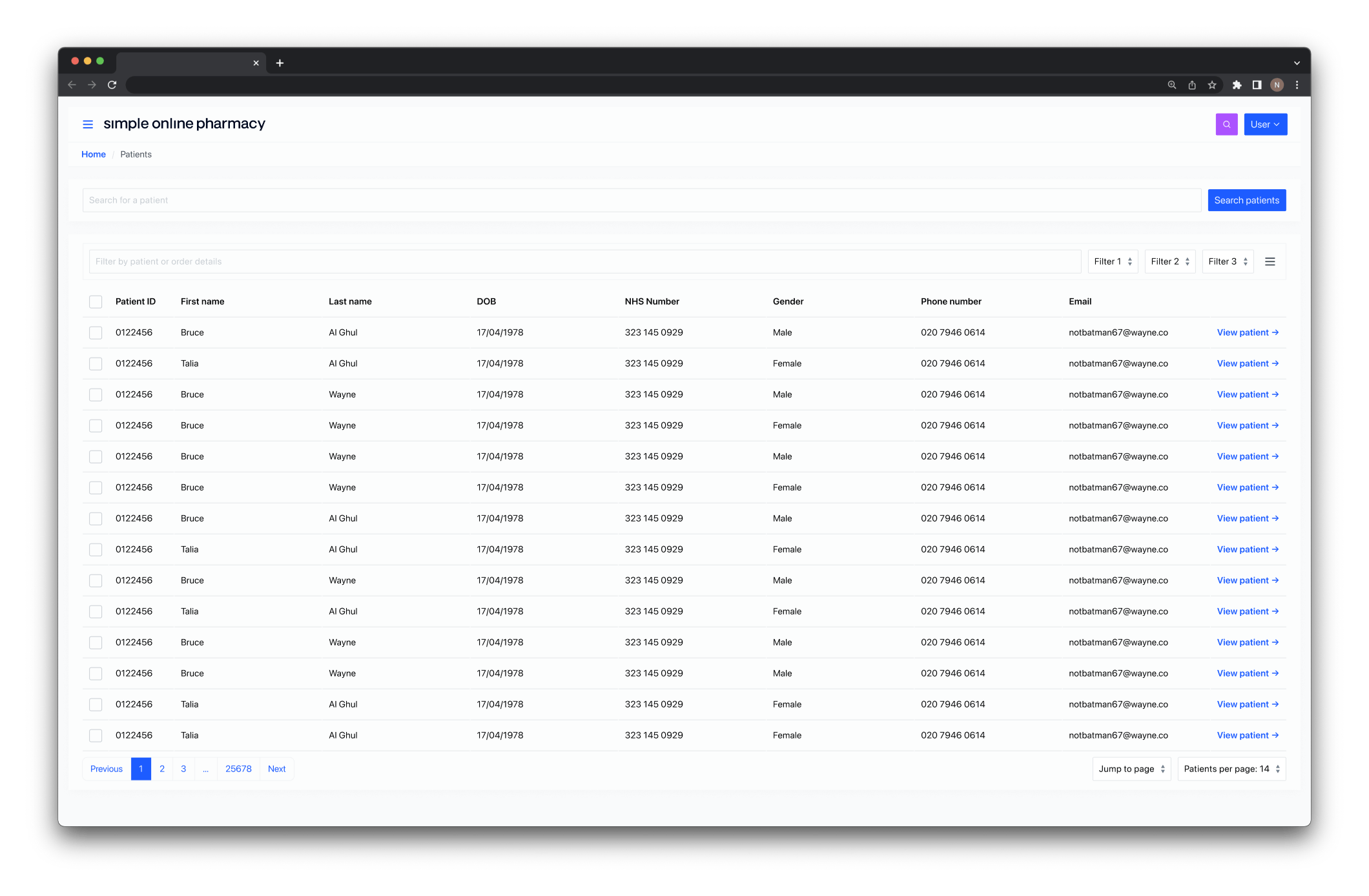 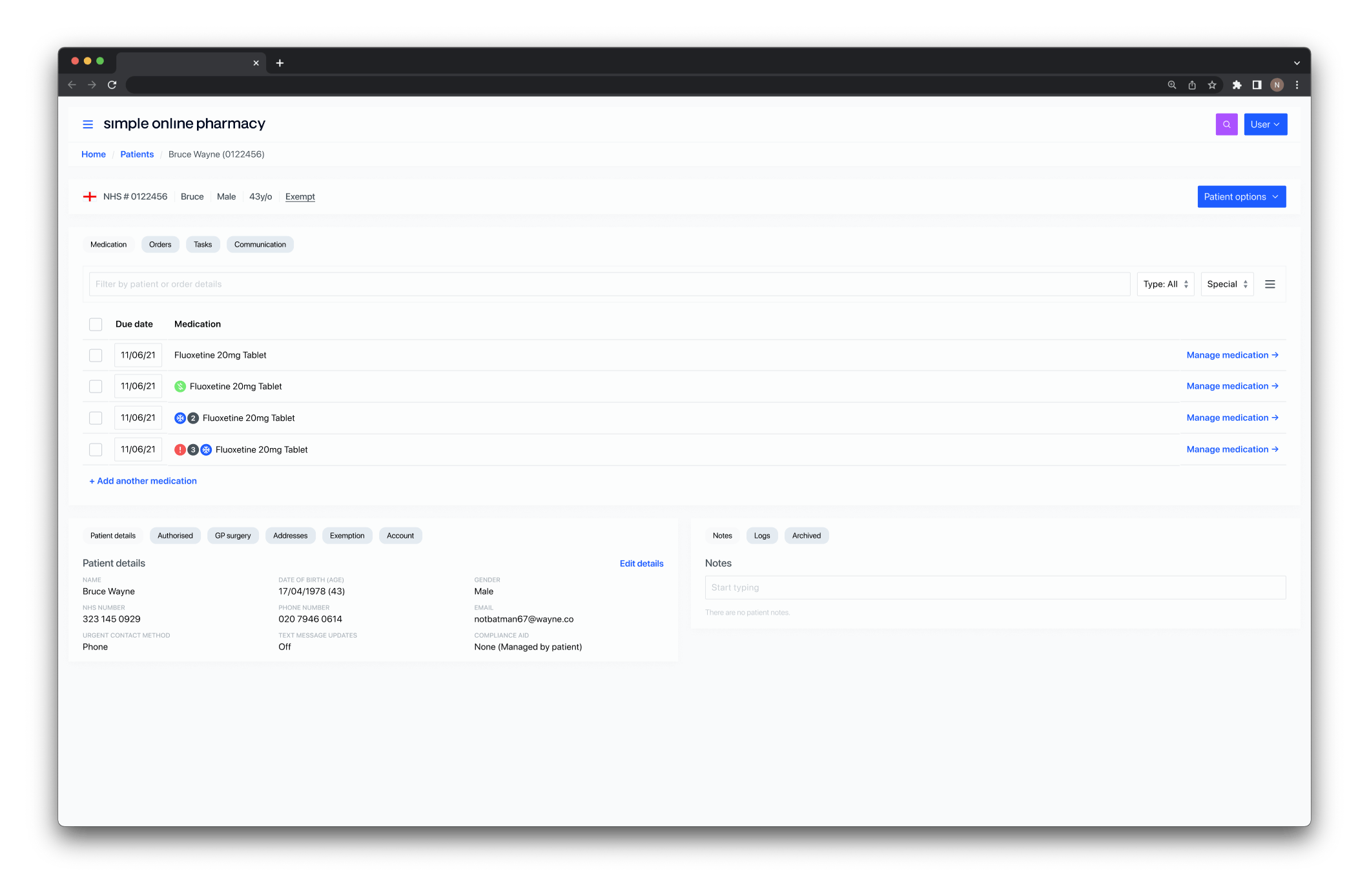 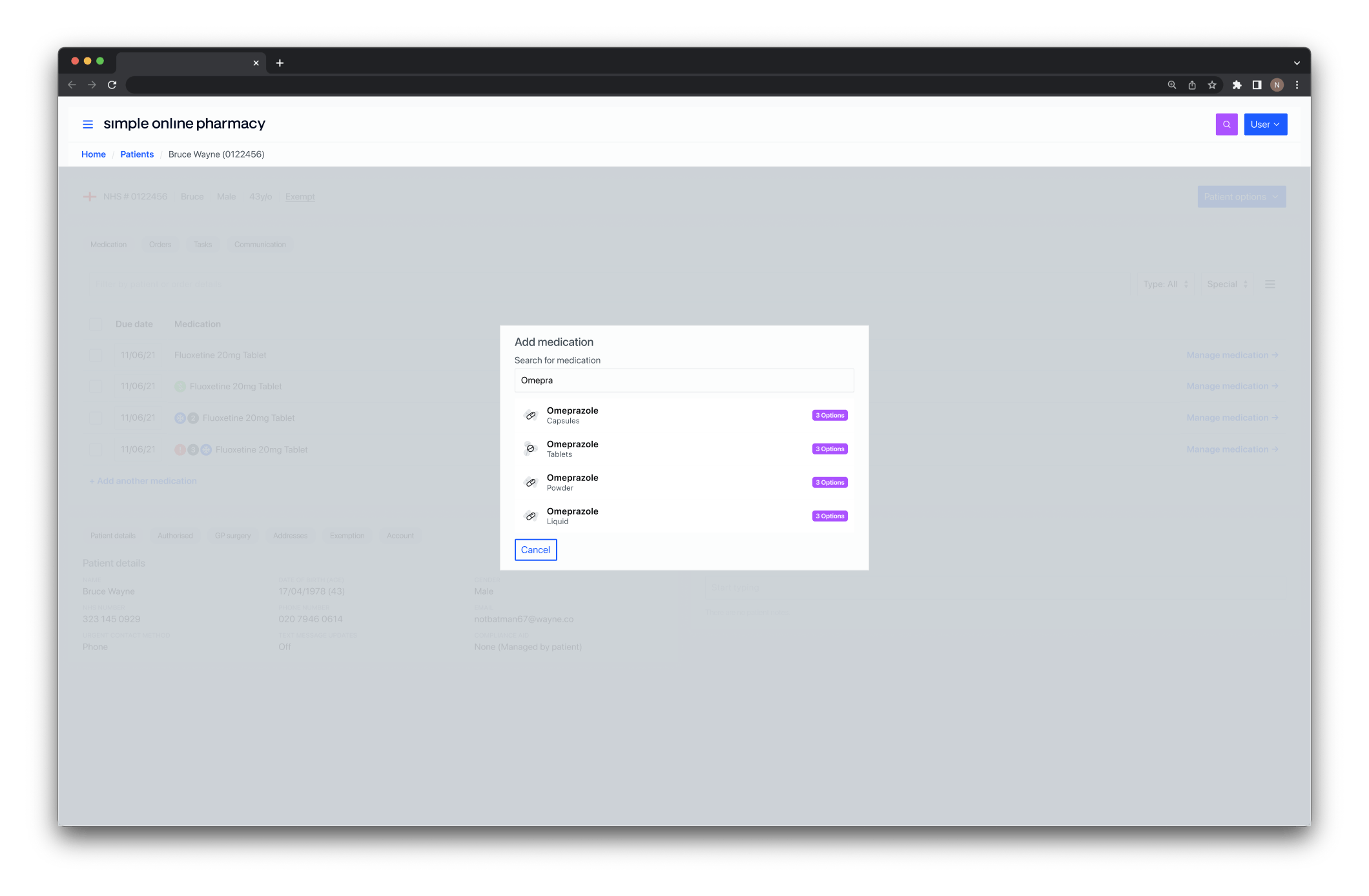 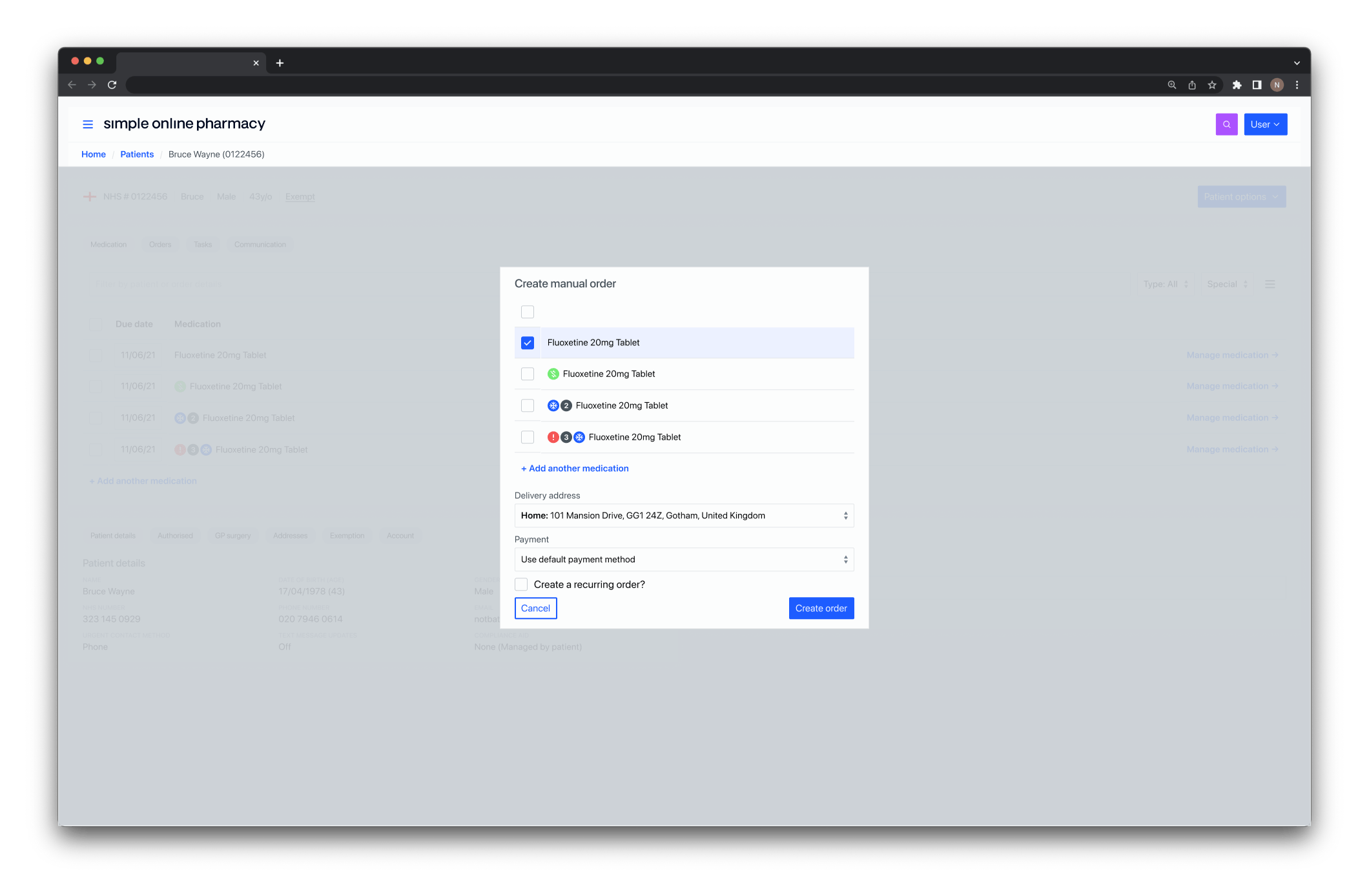 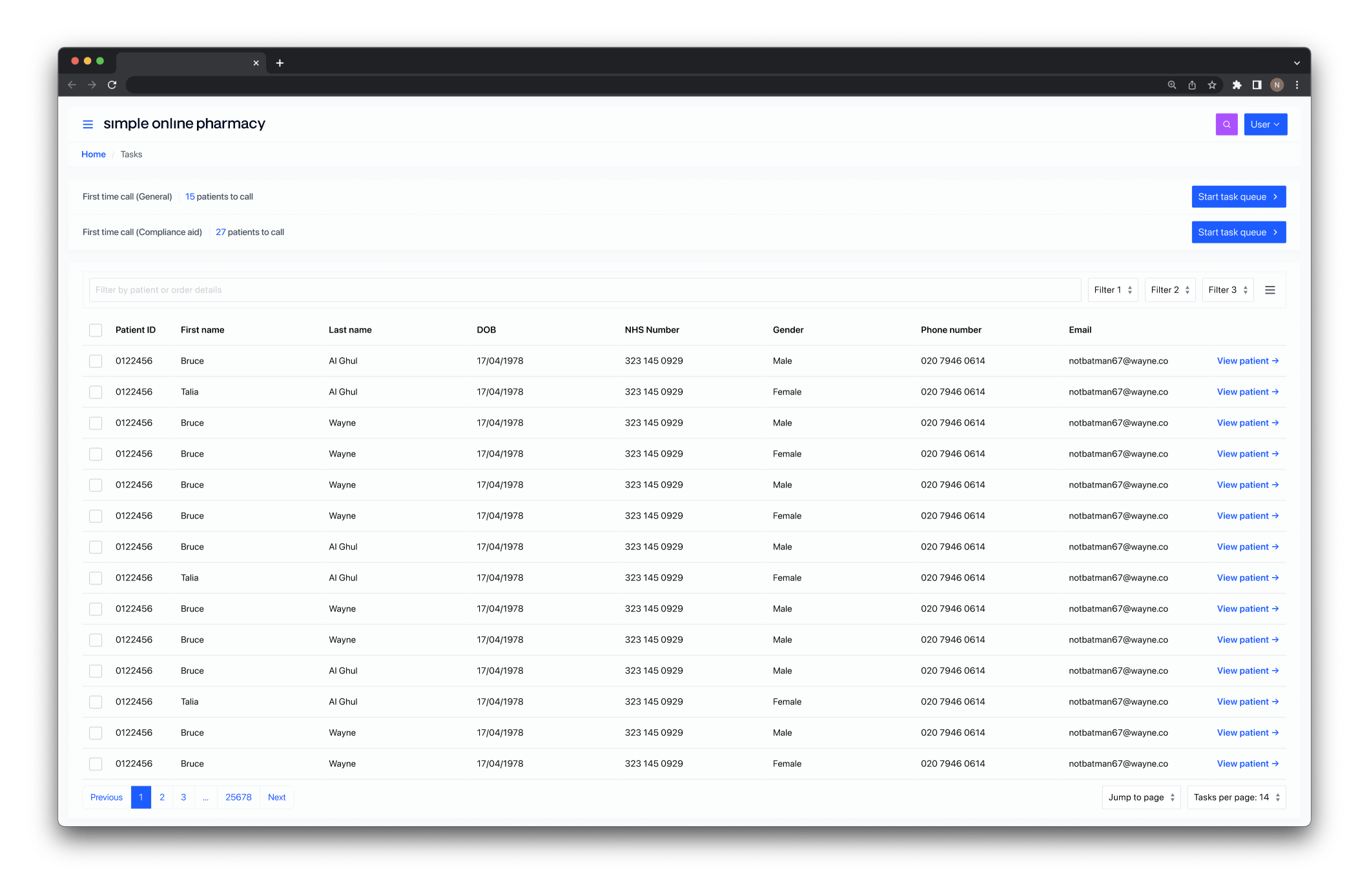 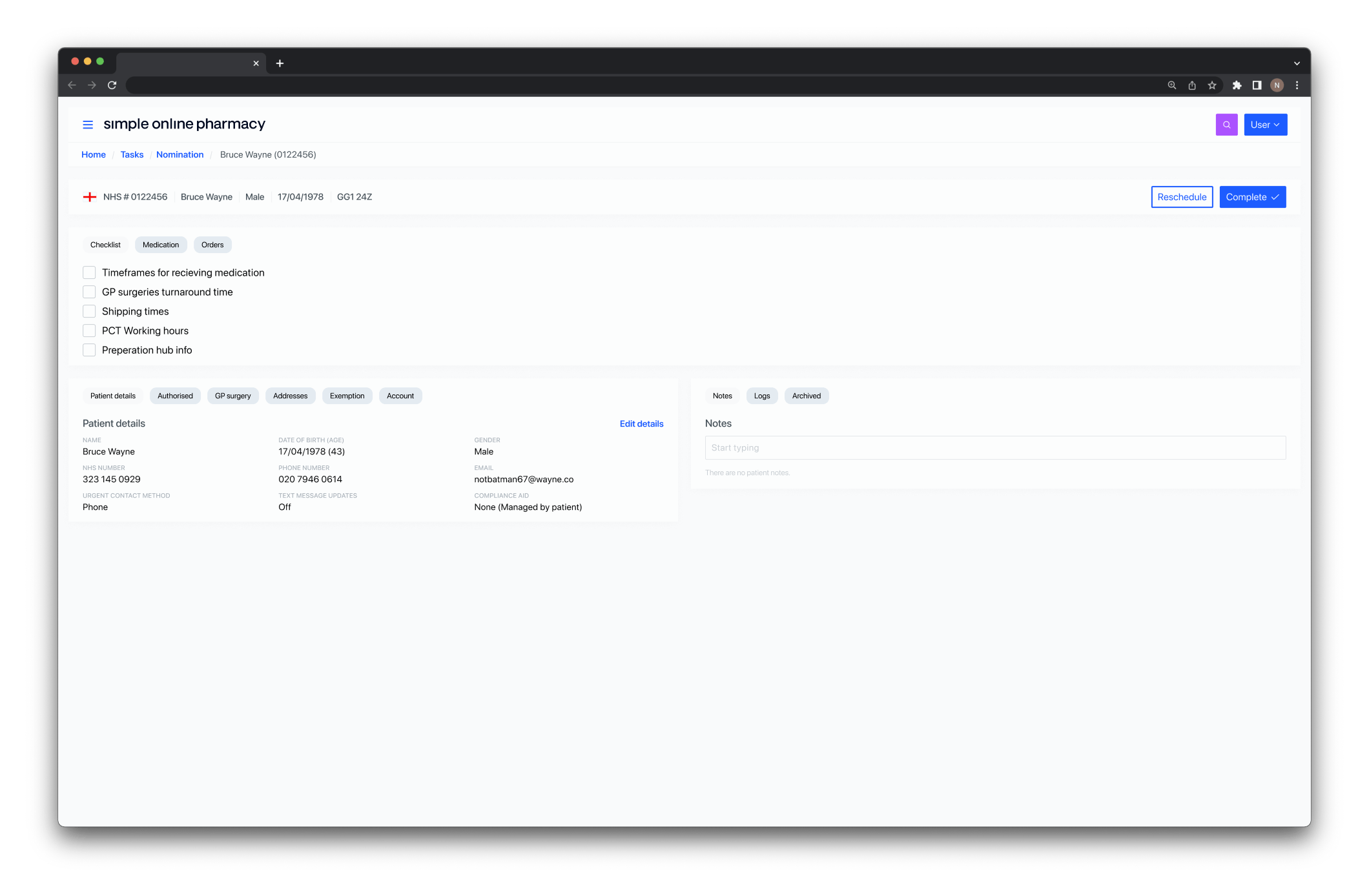 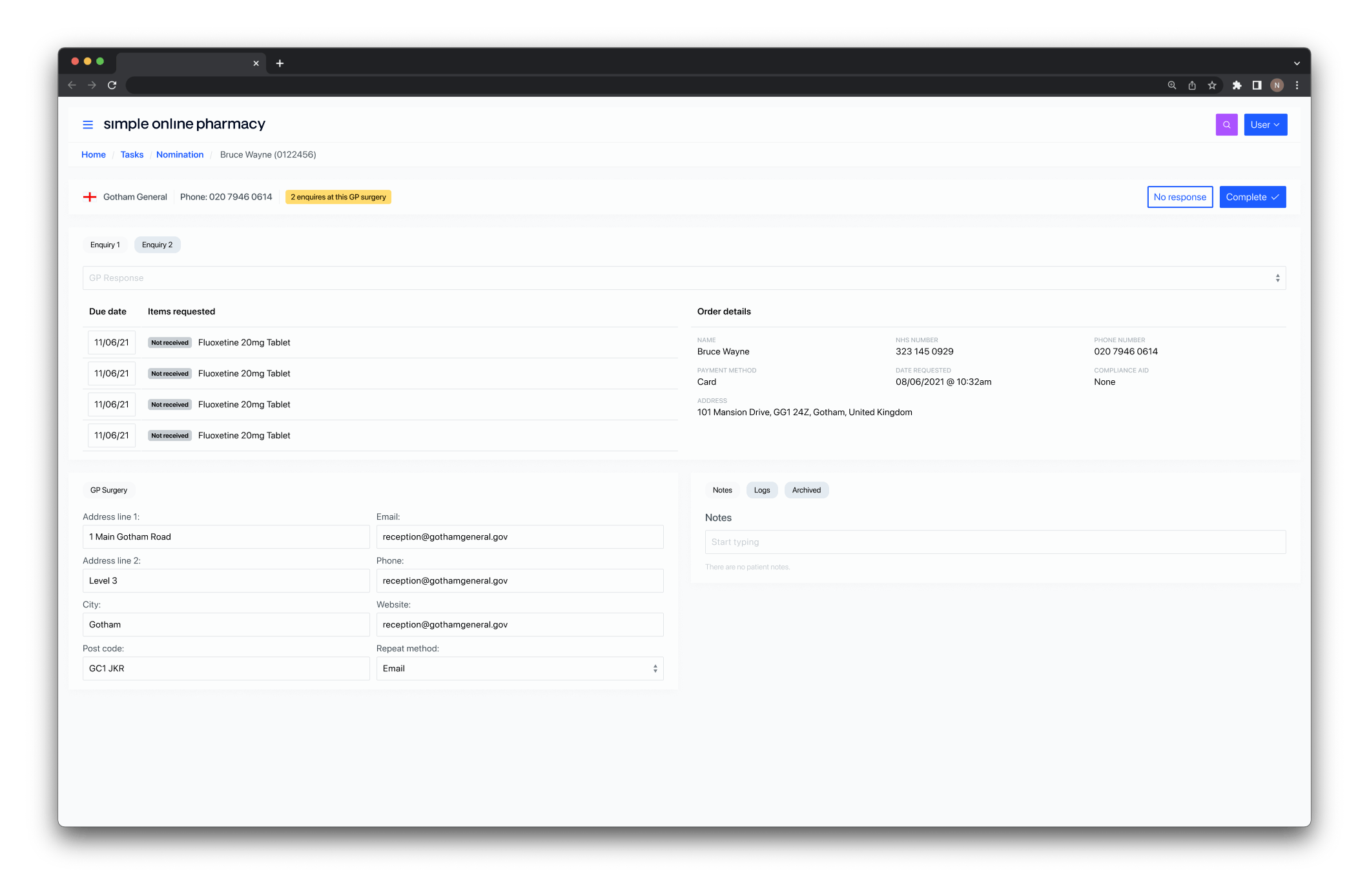 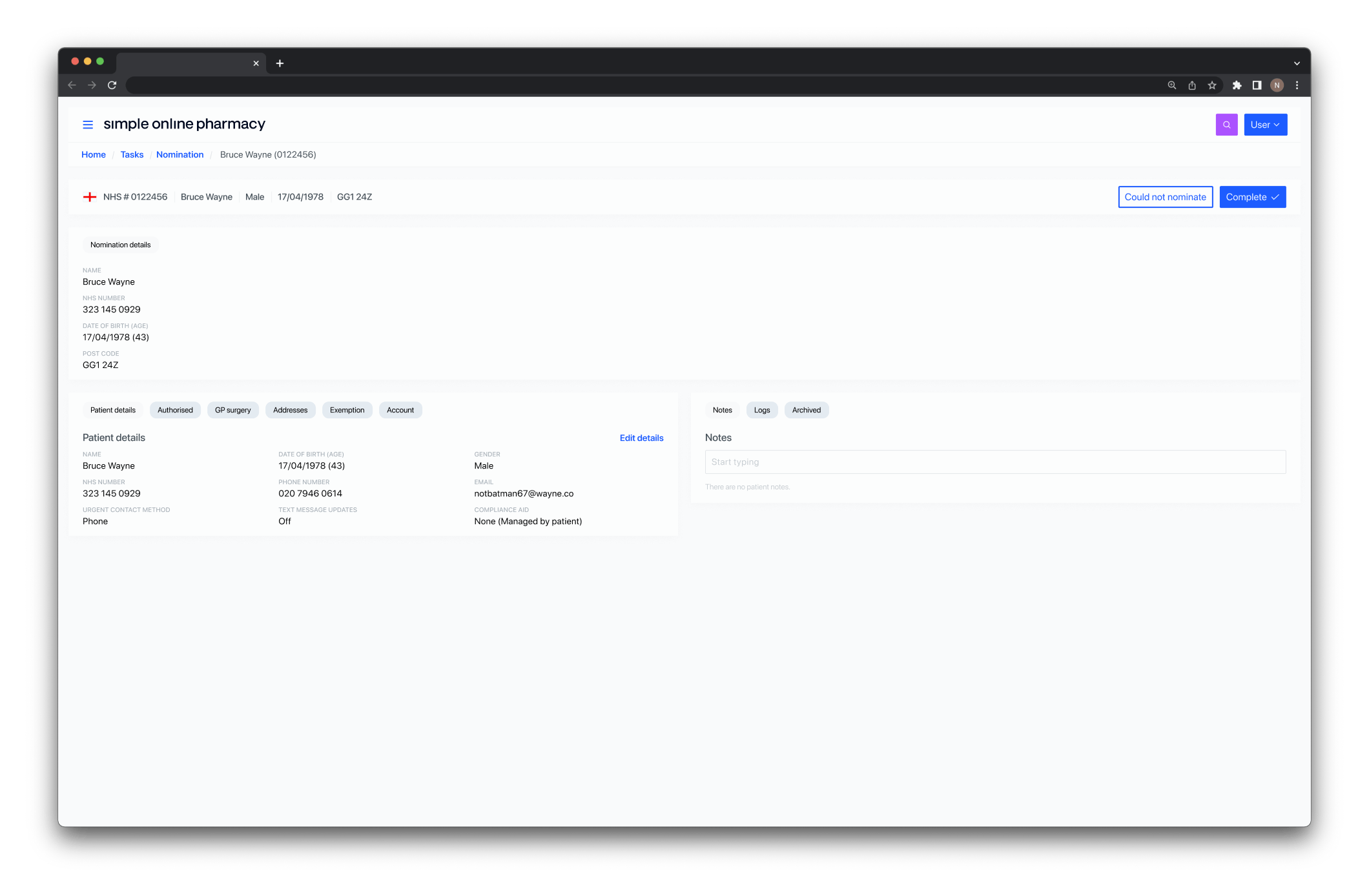 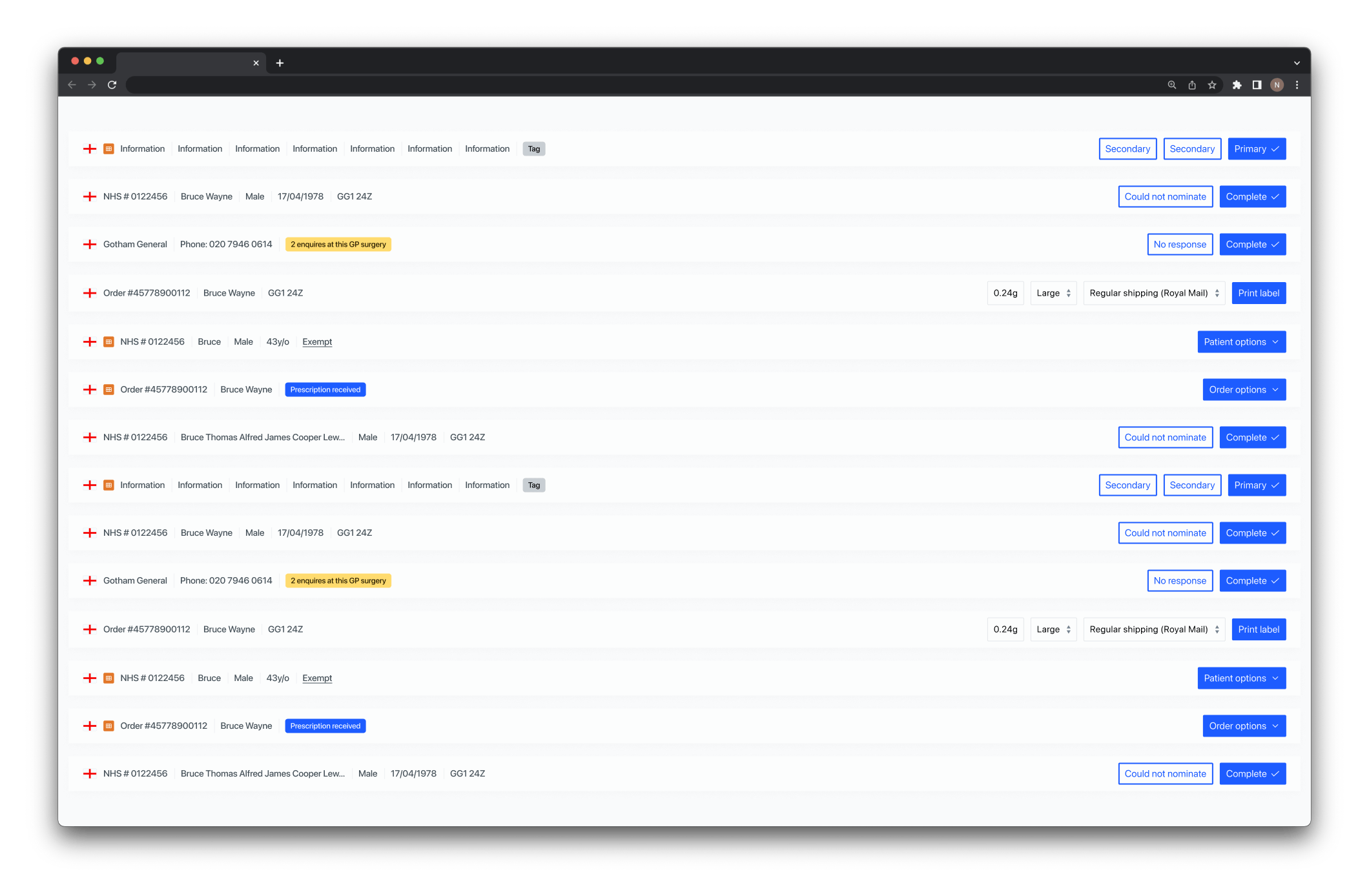 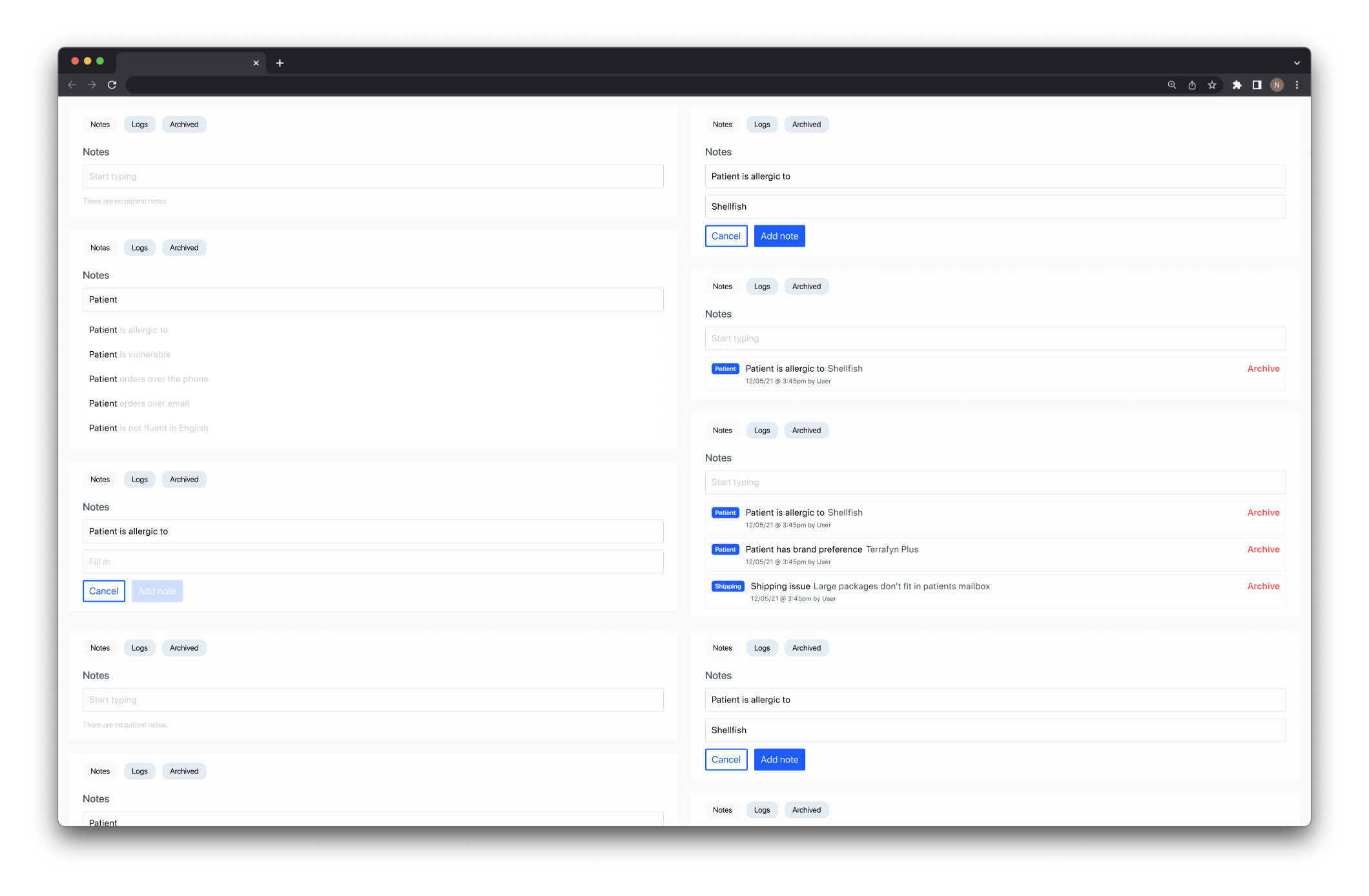 Putting it all together

As the tool was being built, we were continuously testing it. We would get some members of the internal teams to test specific tasks like searching for an order or a patient and see what their thoughts were and how it felt like now that we were working with something that wasn’t a basic click through prototype.

We decided to release a light version of the internal tool that included 2 minor tasks and basic patient and order views. We wanted to do this so that we could get real usage data as well as starting to measure the differences between the old and new tool.

The results of the light version of the tool was amazing, we obviously didn’t know if the whole flow would result in the same level of success, however based on the feedback, we were in a really good position.

The two minor tasks that were released in the light version were the nominations and first time call tasks.

As for the first time call task depending on the duration of the call, a patient care member could make around 12 first time calls in an hour. This number wasn’t improved greatly however the new system gave the patient care team a checklist for the information they needed to provide, a way of rescheduling the call so that they wouldn’t have to follow up manually and it automated an informational email sent to the patient which provided dynamic information based on which items get checked off.

Over the next few weeks we started to release more tasks into the light version, until we had the MVP ready to go. The teams compared it to the old tool and the main problem that came up during the early stages of this project about not being able to find what you were looking for was pretty much non existent.